Except that it isn't the regular show we've come to know.  It took a long summer of negotiations between Senate Majority Leader Harry Reid and Senate Minority Leader Mitch McConnell, but finally, a grand bargain was reached.

I'm unconvinced that making every challenge a team challenge enhances the show.  In the first challenge, the teams weren't asked to produce a cohesive show, so there wasn't any real pressure to work together.  There are two big differences:


In the first challenge, each designer was to take their inspiration from New York City. 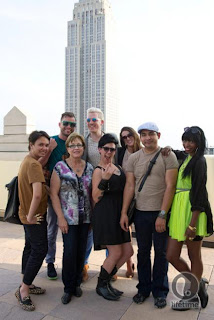 Unlike previous inspiration challenges, there was no specific picture for reference, so in some cases, it was very hard to imagine what actually inspired them.

Of course, the teams picked very lame names.  The Dream Team seemed more like a nightmare, having the weakest designers overall.  There were no shortage of worst looks on that team.  While Team "Keeping it Real" couldn't come up with a more tired cliche, their designers were stronger.  If this keeps up, the Dream Team will be just a Daydream Team in the span of two or three challenges.

Here's the worst of the worst.

Cindy found some fugly leopard print fabric and thought it would be oh, so New York-y to team it up with a red and white checkerboard waistband.  It's as if a tablecloth in Little Italy snuck into a cheesy boutique in Brooklyn.  In the team evaluation with Tim, she fought for a shorter dress.  The team, however, thought it would be a stronger visual to present the full length.  Was Cindy being punked?  If they give her more bad advice next week, we'll know!  Here, as she steams the wrinkles out, we get some idea of the shorter dress she wanted to make.  While the shorter length wouldn't have improved it, the longer length just made it worse. 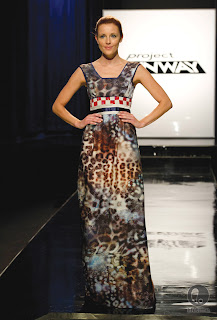 At least it was well fitted.

This was so unremarkable, I'm surprised the judges noticed it enough to give it a low score.   They focused on the top, which featured some sort of stitching treatment at the neckline that looked sloppy and tortured.  I think the two-toned skirt was atrocious.  Even in this small picture you can see the puckering along the stitch line between the two colors.  It was design with no purpose or goal.

But the real loser this week, one we saw coming not 20 minutes into the episode, was this one.

You need to see this close up to get a full appreciation of how bad this outfit is.   The neckline is bunched up like a crumpled paper bag.  The draping across the shoulders has no rhyme or reason.  the back is a barely stitched-up mess.   The skirt is a plain tube.  The top underneath is not the least bit interesting.

Drama-wise, she wanted to make a challenging, three-piece look.  The team tried to talk her out of it, given how little time they had for production.  She ignored them, then proceeded to struggle through most of the production day trying to figure out how to construct the jacket.  In the end, with minutes to go before runway, several members of the team had to produce the top and skirt for her while she struggled with her jacket.  She was a waste of everyone's time and effort and the perfect candidate for this week's auf.

There were a few other outfits worth noting.

That top was very beautifully constructed. 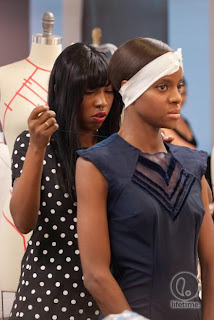 The dress gorgeous, however, the purse contraption, while clever as hell, belonged on a much simpler dress.  The purse contraption is very New York, if you think about how practical New Yorkers must be.  Over a sheath dress or pants, this would have been inspired street chic.  The fact that this was a good design on the team that failed meant that she didn't get the criticism she needed to improve in the next challenge. 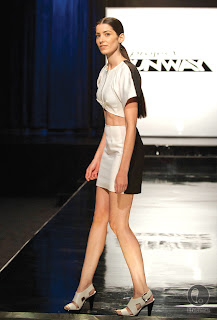 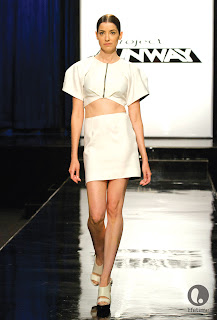 Tu's design was most certainly one of the winning looks in either collection.  That top was architectural without being origami-ed to death.  Perhaps the skirt was a bit too simple, however.  I think it would have served him well to make it a bit longer to contrast the cropped top.  In any case, the black/white combination was very clever and eye catching.

Stan managed to find the shiniest fabric at Mood.  If he's always attracted to shiny things, I think we can expect a lecture about "taste level" in his future.  This outfit walked better than it stood.  Standing, it reveals every wrinkle and pucker.  With better fabric, we may see those construction skills that make him such a great costume designer.  You have to wonder if Stan's comfort zone is in the costume world.

The dress was well constructed with clever detailing and a flattering length.

Patricia used painted fabric panels on top of a dress base constructed out of blue chiffon.  When the dress walked, you saw peeks of blue underneath, but it wasn't enough for me to declare this dress a genius work of art.  Yes, I can see the architectural nature of it.  Yes, it flows when she walks.  But it still looks like a spray painted dress and the shape is a bit tent-like as well.  I'm just not completely understanding the praise that was heaped on this outfit this week.  Perhaps I'll see it in future challenges.

The starlets just dig the "frankendress": mash-ups of two different styles in the same dress.  One sleeve short enough to show off the lower arm tattoo you just got, an asymmetrical hem, it all communicates that you're  that "edgy."  Maybe you'll be edgy enough to star in that independent film that will finally break you out of your rom-com typecasting.   This is a dress full of "now."

Unfortunately, Project Runway has nothing to do with now, so it didn't win.

The peplum and shoulders won this challenge.  The cropped pants on the bottom made the whole look quite fresh, as did the 3/4 length sleeves.  The fit was flawless.  Daniel's got incredible skills, no doubt.  He's also got years of experience over most of the designers.  He'll be hard to beat.  Should this look have won over Richard's?

The producers are promising us some exciting challenges.  They've got some extra budget to blow, so they're sending designers to different cities around the world.  We've got Chippendale dancers and team shake-ups ahead of us.  But in the end, Project Runway is all about the individual designer, no matter how they try to shuffle the decks.